You might think that there’s not much you can take from the buildings of Game Of Thrones to inspire what you do in your garden, but there’s so much creativity and imagination that goes into creating these fictional pieces of architecture.

From the flying castles of Studio Ghibli to the magical manors of Harry Potter, Angie’s List has come up with some of the best and created these stunning hand-drawn illustrations to inspire you.

The Lords and Ladies of Westeros and beyond have some amazing castles, so it’s no wonder they all spend so much time fighting each other for them.

But you don’t need to hold a Red Wedding to get your hands on something that looks as good as Highgarden, you can just use a bit of stonework in your garden to add some Game Of Thrones majesty to your property.

The magical architecture of Diagon Alley would probably not make for the most comfortable home in real life but there is a lot you can take from the buildings in the Harry Potter series.

Hagrid’s Hut and the Lovegood House are both examples of the rustic charms of the wizarding world, which can transform your home from looking like 4 Privet Drive to being as exciting as Hogwarts.

Tony Stark no doubt spent millions on his mansion, and most of us can only dream of something like that, while Avengers Tower might be difficult to recreate in your backyard.

However, the Marvel Cinematic Universe is packed full of inspirational architecture for you to consider when planning your next project.

The mishmash of styles in the Grandmaster’s Tower alone offers pointers for the kind of creativity you too can employ.

The blend of nature and dream-like architectural styles is a huge part of what has made Studio Ghibli’s animated movies so popular around the world.

A castle floating in the sky might be beyond you, but Laputa is still full of potential inspiration, while the traditional Japanese styles of the bathhouse from Spirited Away can really bring a garden to life if you use them well.

From the lush gardens of the Royal Palace of Naboo to the ramshackle charms of the Mos Eisley Cantina (aka a ‘wretched hive of scum and villainy’) the Star Wars universe is a treat for the eyes and the creative brain cells alike.

The flag-strewn grandeur of Maz Kanata’s Castle or the domes of the underwater Gungan Palace is other examples of ideas you could bring out in your garden. 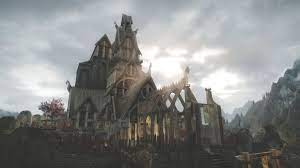 One of the joys of an ‘open world’ game like Skyrim is getting to wander and explore the imaginatively-created realms at your own pace.

So if you see a piece of architecture as singular as the Jorrvaskr or Hakkvild’s High Hall, you can take your time to walk around them and pick out the small details that you can bring into real life in your own garden.

With or without the help of a mage and some potions you bought from the marketplace.